No Cops in Arkansas Town 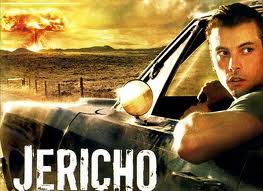 Ok…the picture was a little too easy this time.  It may not be the stuff that the little-remembered CBS series entitled Jericho was made of (the aftermath of nuclear war seen through the eyes of the inhabitants of Jericho, Kansas), but the real-life happenings in Jericho, Arkansas are pretty unbelievable too. Fox news story about criminal investigation into Jericho, Arkansas.

The rundown?  Jericho:  a town of 174 residents and SEVEN cops.  Cops write so many traffic tickets that the sheriff’s office can’t get cops to respond to calls.  Jericho’s fire chief (I don’t even want to know how many firefighters they have) was apparently the recipient of one too many of those tickets, and he complains to the town’s judge in open court (as is his right to do).  As it was court day, all Jericho cops were in court, and all or some of them take exception to the fire chief.  Fire chief scuffles with cops.  Fire chief not armed.  Cops armed.  Cops (or at least one) SHOOT fire chief from behind in his hip (yes, I said “shot”…that’s right, with a gun).  Fire chief lives.  Judge resigns.  Police Department disbanded.

Admittedly, this isn’t the kind of thing that happens everyday.  I don’t think “cops shooting defendants in court” has reached an epidemic level enough to call for systemic change…at least not yet.

The bigger story here is “Who in the hell let a town with 174 people have SEVEN cops!?”How long was this going on?  What other towns in Arkansas (and other states) are propping up their police departments (and local government) on the backs of their citizens by charging them with CRIMES?  Hint:  More than just Jericho.  Take a trip to your local district court on any day that criminal court is in session.

The saddest part here is that the poor citizens of Jericho would have been forced to silently endure this crap if it hadn’t been for the fire chief laying down his life hip for a right and just cause.